Go back to all Cases
Property rent

Reducing the amount of conflicts between landlords and tenants and exclusion of human participation in the process of renting accommodation.

We were applied by a client who wanted to build a service for daily accommodation rental - something like Airbnb. The service should function as an intermediary between tens of thousands of homeowners and a large number of potential tenants.

A common problem of such services is conflicts between tenants and landlords - after accepting early booking of accomodation, the owner may receive a better rental offer, this may cause a desire to cancel the accepted reservation. For instance, the owner may refer to a delay of a bank transaction, and tell that he confirmed another rental offer before receiving the payment for early booking.

Obviously, the owner of the service can track all this information in the system and require the landlord to pay a penalty to the client. However, this process requires the service company employees participation, which takes time and financial expenses. And moreover, the client of the service will have to urgently seek for another accommodation, in addition to the fact that the payment refund will not be made immediately.

Considering that the bank cancels transactions only after receiving all the necessary confirmations, the refund process can take up to several days or even weeks.

In order to exclude the human factor from the system, we proposed to implement a blockchain-based solution that supports a function of Smart Contract. This is Hyperledger Fabric blockchain, which is provided along with other AWS services.

The fundamental point here is that payment is credited to the owner's account or returned to the client only after all the business rules are verified in the course of Smart Contract execution. Up to this point, all calculations are made in the internal currency of the system. And even the system owner receives his commission from users only as a reward for the Smart Contract execution, when a transaction in the blockchain is confirmed.

So, each rental of accommodation corresponds to a new block added to the blockchain, but it is added only under condition of the Smart Contract execution. More details:

All additional terms are included in the contract at the moment of the deal conclusion after confirmation by both parties. The contract also may include penalties, both for the landlord and the tenant. In case when some of the declared services were not provided by the owner, it is recorded by the client as soon as this fact was discovered. A mobile or web application is used for this purpose.

This approach reduces the presence of human factor in the process of renting accommodation and in resolving conflict situations.

Our application consists of the following components:

For the development of a cross-platform application we have chosen React Native technology. The React framework was used to develop the front-end part of the web application. For the back-end we used Node JS.

Our client is launching an MMORPG game and involves high-quality designers to create artifacts` graphical representation, which is supposed to have some artistic value. We implemented his idea to add a commercial component and enlarge the game community by creating a solution for selling game artifacts among existing players and potential users. 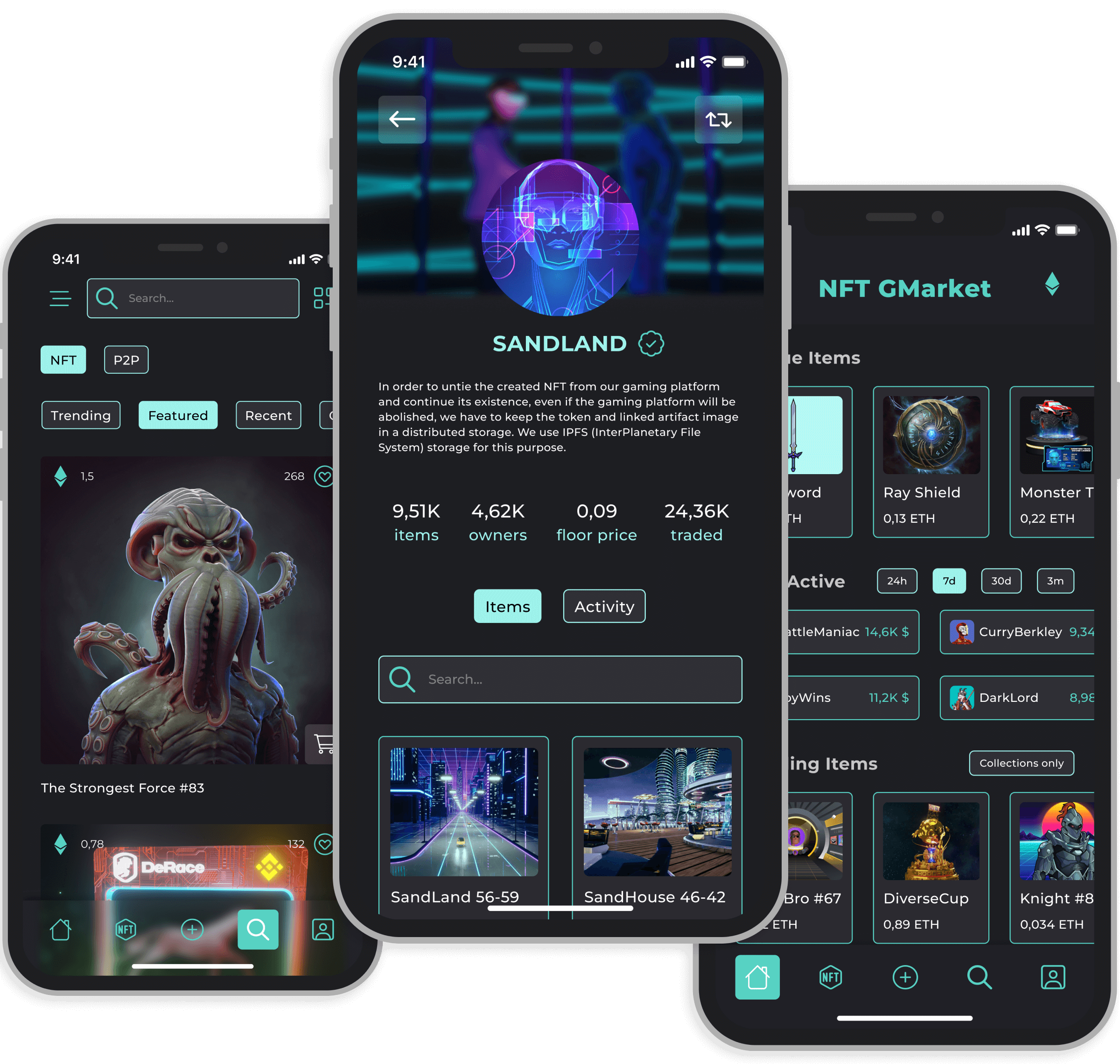 Remote medicine provides quality medical services for the countries where life standards are not at the highest level. But the establishment of a trusting relationship between a doctor and a patient at a distance is one of its core issues. Application that guarantees safe and reliable medical records storage significantly elevates the trust level of patients.